On the Road Special with Munir Mehic: “I want my team to know what it feels like being away from family and friends.” 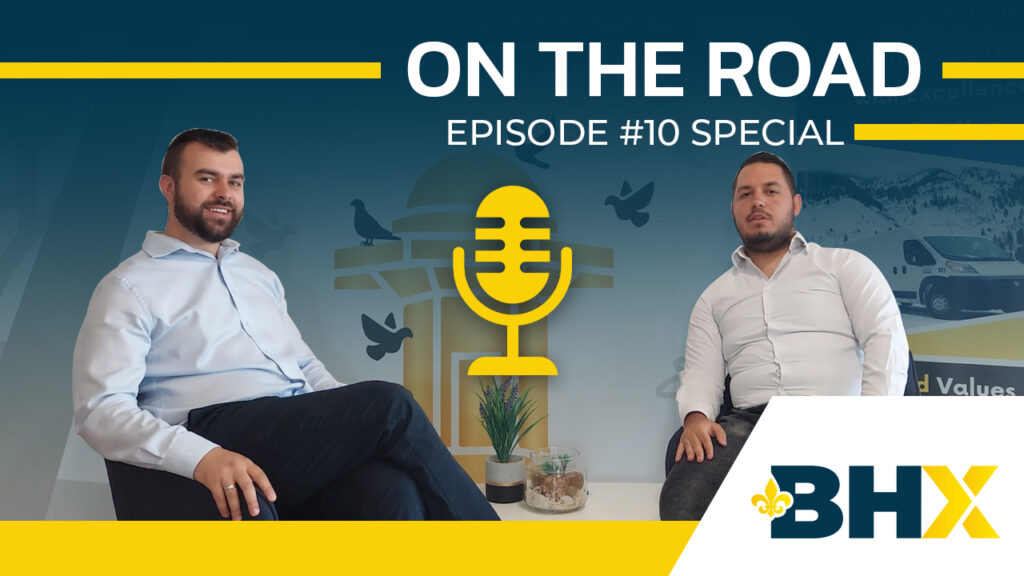 On The Road show marked its first milestone this week as it reached its 10th episode. Vedad`s special guest live from Royal Blue Services office in Sarajevo was Munir Mehic, Office manager of the company. Royal Blue Services is a service provider in areas of customer service and dispatch for BHX. This was a first episode that featured face to face podcast.

Show kicked off with Munir telling us how it all started

Much like many other members of the team, Munir had no prior experience in transportation and logistics. However, he recognized that the company has a vision and decided to give it a shot. He needed a job as he made a major decision at the time – he was about to get married. And then it all happened – in one single week. It was surely one of the most fascinating stories so far.

Company values hard work and commitment, Munir shares his example
“I joined in July 2020. and I started to work on saving and dispatching loads. I gave it my best day in and day out and did my best to learn as much as possible, as fast as possible. People have recognized this and by the start of winter that year, I was promoted.”

Passion for history and soccer

Our guests have revealed what personal interests they have in the past. Same question was extended to Munir this week and his answer brought in something new and refreshing. Munir is a big fan of history.
“I love Islamic history, I have spent a lot of my time researching it. I am now focusing on World War II and Winston Churchill.”
We asked Munir what will be the next area of his research.
“Scottish cultures and their history. They fascinate me.”

Vedad raised a fun question at this point, asking Celtic or Rangers (top soccer rivals in Scotland)
“I stand more with Rangers. They have been the underdog for a long time but got back and won championship recently. The only thing I don’t like is the color of their kit (blue), I am a Liverpool FC fan and red is our law.”

Much like many other Liverpool FC fans, Munir is on the edge of his seat when it comes to the upcoming Champions League final vs Real Madrid.
“I believe we will win. They are an experienced side and not to be underestimated, but I hope we will win.”

BHX – Development of the company, release of the app and the future

Munir is one of the people who stand at the highest segment of company’s structure. We used this exclusive opportunity to ask about the ongoing developments, the app and what the future holds in terms of planned features and improvements.
“This company has a strong vision. Owner (Aldin) is a man who radiates that vision and I recognized this from the start. That is what I love about this place the most.”

Self dispatch and auto dispatch

Emphasis on giving the opportunity to drivers to pick own loads, own rates, set mileage limits and fit their working schedules along with their personal plans has been a mission we were on for a long time. Release of app has finally made the dream come true.
“You are presented with two different modes. You can do self dispatch and assume full control over what loads you are interested in. You can set your own rate, adjust the times, evaluate the mileage. You are basically in charge.”

Alternative exists for those who are driving or do not have time to monitor markets
“You can set your own filtering criteria such as rate, mileage, US states or Canadian provinces you wish to go to, as well as those you do not, etc. We are planning on adding more to give you more options when setting up auto accept criteria, so stay tuned.”

Most passionate element of the job – care for drivers

“This is what makes me happy or sad at the end of the day. Are our drivers booked? If not, what are our chances of booking them soon? I do not want to go home and see that we have a driver who still waits for a load. Especially if he is located in a remote state where our chances are slim.”

More about Munir’s career path and personal interests, company and app development, Royal Blue Services and much more in the full episode release on Monday, exclusively on our Youtube channel.