On the Road with Emir Krvavac: “There is not a better company for drivers than BHX in the United States.” 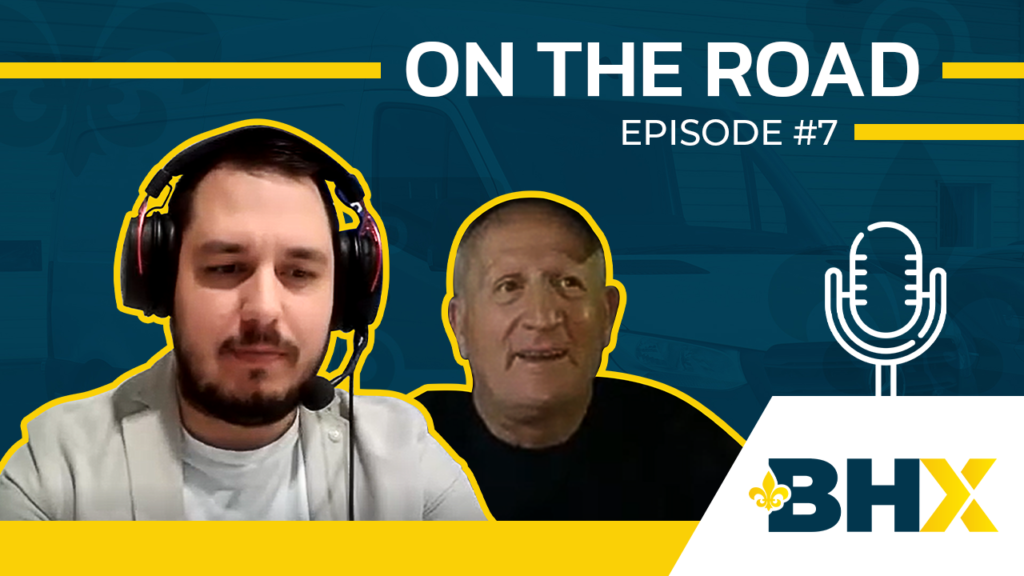 Vedad’s special guest for the 7th episode of On The Road show this week was Emir Krvavac, one of the longest employed drivers of the company. Emir has been with BHX since August 2016 and will soon celebrate his sixth anniversary with the company. Emir was voted as driver of the year for 2020. He is 61 years old and lives in St Louis, Missouri. This week, we bring Emir‘s story to all of you.

“I had my daughters and grandkids visit me during the holiday, we all had lunch together and it was really good.”

Emir was in a concentration camp in Dretelj during the Bosnian war. They were lucky to be able to get out of there alive and sent to Germany. Emir told us his story and how he ended up in the United States.

“I was in camp Dretelj with my family… we went to Germany from there, all of us. We spent six years in Germany and by the end of 1998. we moved to Saint Louis. I believe it was December of that year. Me, my parents, my wife, three of our children. I got into a fiber processing plant in the beginning, I worked 12 hours night shift for about 9 years. I met many Bosnians in the plant.”

Emir lives nearby our office in Saint Louis. We asked him how often does he stop by.

“I stop by from time to time. I meet Aldin. We usually exchange a few words about stuff not related to work.”

Emir is a big fan of action movies. He has weights in his van and lifts to keep himself fit when on the road. He loves motorcycles.

“I have NetTV+ on my iPad and my phone. I watch movies there. I watch the action genre only, I am all about action. I lift weights in my van to practice when on the road. I am not exactly a sports guy, I like motorcycles and I have two at my home. They are both Honda`s.”

We focused on Emir and driving career then. We asked him to tell us how did it all start.

“I used to have my cleaning company and did that work for 8 years. Used to be overbooked and underpaid. I decided I needed a change and I called Aldin. I told him I needed a new job and he helped me get in. In the meantime, my mother passed away, so my starting date had to wait due to that. I got big help from Aldin to kick things off and then I started learning and gaining more experience. Every load brings its own story and its own lessons.”

Emir is set to celebrate his sixth anniversary with BHX in three months. We asked him to pick the most memorable load he has done with us so far.

“I had a load picking up in South Carolina. Drove about 1000 miles through USA, then got into Canada, drove another 400 miles there. Got on a ferry, then continued for another 350 miles after landing in Newfoundland and Labrador. It was a very fun and unusual trip involving many things which I did not experience before and it was well paid.”

As a driver who has spent many years with us, we asked Emir to reflect on BHX development and service upgrades. We asked him to describe the impact of this from drivers point of view.

“I referred some people to Aldin to work with BHX. Some have stayed, and some did not. I would never change BHX for another company. If I did, that would mean me not being a driver anymore. There is not a better company for drivers than BHX in the United States. I told Aldin to keep this golden team.”

We asked Emir to further explain to our viewers what makes BHX that good.

“Start from how the load is presented to the driver. Rate sheet is very detailed, all information is there. You know it all about the load. It is important to me to know where I am taking the load, how many miles are on it, and to know how each individual load is paid. Some companies out there are hiding information from drivers when dispatching them. I cannot understand how some drivers out there accept to work under such circumstances. Whoever thinks they can do better elsewhere, they can go ahead and try, but I do not believe they will find a better one.”

With BHX app making the headlines lately, we asked Emir to share his views on the app release.

“I think it is a great application. There will probably be some minor changes here and there, which is okay, but I think it is a major thing. It is all new to me, but I very much like the possibility that we drivers will have the opportunity to control when and where to go.”

Much like our previous guests, we asked Emir to send his message to the BHX universe out there.

“First I would like to thank you guys in Sarajevo and these people working in the Saint Louis office here. Sarajevo team is special and they are at such a remarkable level when it comes to everything. They are very supportive, they give good loads. I told Aldin to keep this golden team around, they are very good and they take great care of the drivers. I thank you all for that.”